skip to main | skip to sidebar

The Saga of the Strange Rooster

I looked out the window Monday afternoon to see a red chicken coming out of the woods and trying to get into our garden where our chickens were scratching in the dirt for bugs. I did a head count to make sure ours were all there. Yes, 12 hens and the rooster. Then I went around to check on this new one.

A Rhode Island Red Rooster that looked like a young one. I have no idea where he came from as the closest 3 houses don't have chickens and are at least 1/4 mile away. We corralled him and opened the gate, so he ran in. Ours let him feed and even go in the chicken yard for a drink, but they wouldn't let him roost with them.

The next day I found him outside the fence again trying to get in and opened the gate for him again. It's so much easier with our chickens who aren't afraid of me and let me just pick them up. Poor thing kept just throwing himself against the fence to get in. Chickens aren't the smartest of animals but so much fun to watch-they are just like in the cartoons. 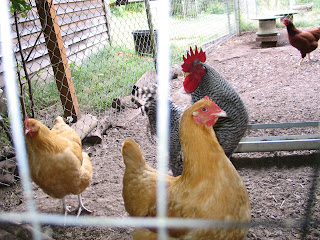 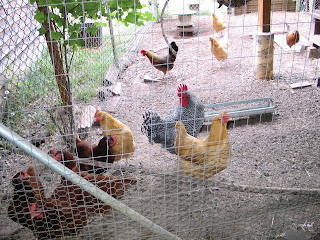 Last night he wouldn't go in the chicken yard but went on the roof instead and then up on the shed roof. We have to close them in at night because of coyotes, hawks, owls, bobcats, and such that love good, fat chickens. This morning he's in the garden, so he's still OK. I hope he adjusts to our flock, but I do have a possible home for him, if no one else claims him.

I'm including the photos of our chickens. The rooster is a Plymouth Rock. There are 5 Buff Orpingtons-the golden ones-5 Rhode Island Reds, and 2 Sex Links. They are all big hens and good egg layers.
Posted by Sandy at 7:53 AM 5 comments: 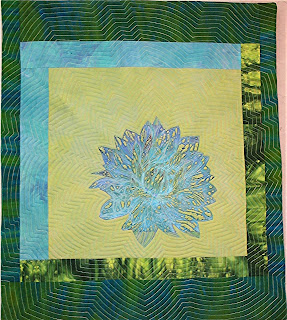 This is a small quilt I just finished. It's about 20" by 24". The flower is from a photo I took and made into a negative in Microsoft Picture It. The colors are more the ones I like that the regular image. I printed it on Tyvek and machine embroidered it to the hand dyed background. Then I hovered an iron over it to melt parts of the Tyvek. Be sure to do it safely with good ventilation if you try it. Also, if you print on Tyvek, only use an inkjet printer. A lazer printer would melt it and make a total mess.  It seemed to want echo quilting. 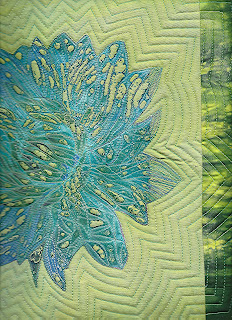 Because the print comes out as a rectangle and a flower usually isn't, I used machine embroidery to complete the petals that weren't printed.
Posted by Sandy at 5:00 AM 3 comments:

This week it's Chain Stitch with www.pintangle.com  The stamped image is from a styrofoam plate I made just using a pen. It's a leftover from taking a meal home. I love to reuse rather than throw out things. They are good for experimenting with shapes, because if they don't work out, you really haven't lost anything. The main vein and outside are the chain stitch.

Chain stitch is another regular for Crazy Quilt.

It can be whipped over, threaded, or stitched over an earlier row.

I meant to say that the quilt is about 15" by 12" small enough to try things and large enough to see the work. I liked the idea that it combined all the things I love to do-machine, hand, couching, quilting.
Posted by Sandy at 11:29 AM No comments: 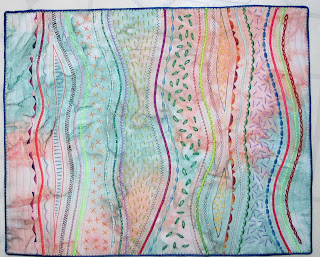 I had too much to do but couldn't resist the Stupendous Stitching class at www.craftsy.com The time must have been perfect for me, because I did the 11 episode class in a little over a week. It gave me the perfect chance to use the threads, yarns, cords that I can't resist buying.

Thanks everyone for the comments. They make my day and things have been challenging again, so they really help.
Posted by Sandy at 10:30 AM 5 comments: 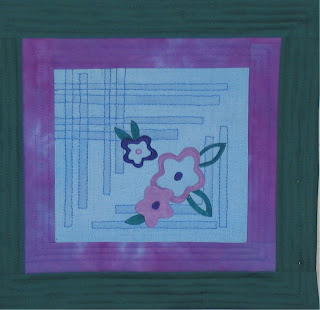 When I worked for Aardvark Adventures in Livermore, California, we carried a kit of papers painted with colors to do transfers of the color to synthetic fabrics. I did the center piece to test it and for a sample to go in the catalog we sent out. I finally finished it into a small quilt.

The flowers are ultrasuede and machine stitched down. The lines have hand stitching that I recently put in to emphasize the bars of color. It's machine quilted.

Sadly, Aardvark is no longer open, as she has moved and gone on to other things. I really learned a lot working there. It was a fun place being surrounded by all the things I wanted to play with. It was mail order before things were available by the internet.

It's Detached Chain stitch this week for the challenge at www.pintangle.com It makes a nice addition to other stitches used in crazy quilt. 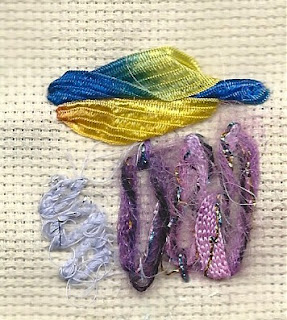 Here it is using weird yarns and a ribbon. It would make good texture in a piece. 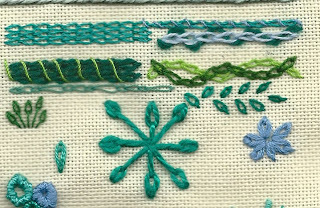 This also has a regular chain stitch and the detached one used grouped to create a motif.

More grouping and adding extra stitches to it.
Posted by Sandy at 8:11 AM 2 comments: 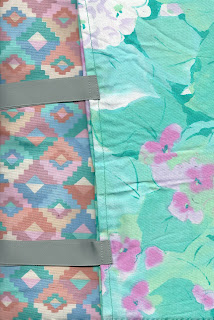 One of the charity projects Columbia Fiberarts Guild is doing is to make tote bags for women and children who have to leave an abusive situation with only what they can carry. Here are two of the prints I used to make a bunch of bags. I am so lucky to be in a loving marriage. 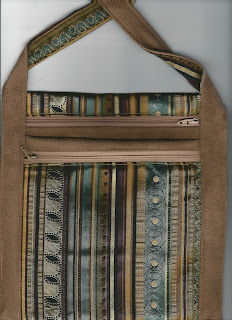 On TV Linda McGeehee made this type of bag on a show for Martha Pullen. It was so neat I had to try it. Of course, I didn't decide until I no longer had the show and had to figure out the details on my own. She does have a pattern on her website for sale, but I was sure I could do it. It starts with two long rectangles of fabric with a zipper in each end. Then you fold it not quite in half and put on a strap-cool idea.
Posted by Sandy at 8:36 AM 2 comments:

This is February's Bead Journal Project Cuff. The background is felted using a thick and thin yarn. I used silver metallic thread to quilt it then beaded is with stones and beads. The closure is three snaps, so it overlaps around the wrist. When I showed it at quilt group, I had a bit of a problem getting it back. One friend has a necklace that could go with it, so we may have to make a deal to share both.
Posted by Sandy at 7:42 AM 6 comments: 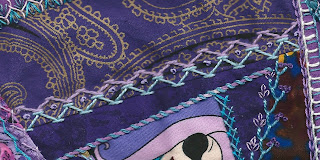 This week we did the Chevron Stitch for the challenge at www.pintangle.com  It is one of the regular ones I do on crazy quilt. 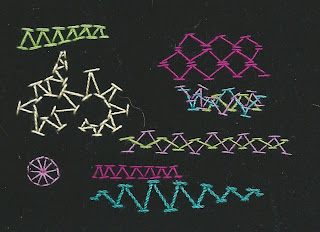 On the black wool again complete with dog hair like everything around here. Jake wants us to know he's the studio dog and is putting his stamp of approval on the work. 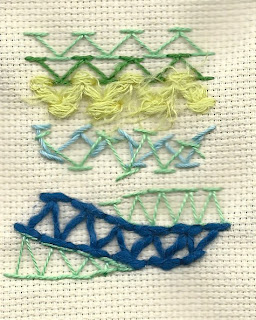 It works well with unusual threads and can be made to look like it is overlapping.
Posted by Sandy at 6:07 PM 1 comment: 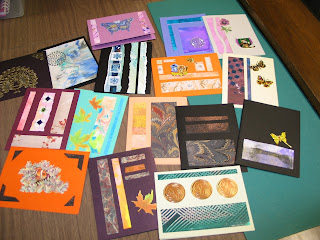 Our daughter came yesterday for an Art Day. We made cards and had a great time. 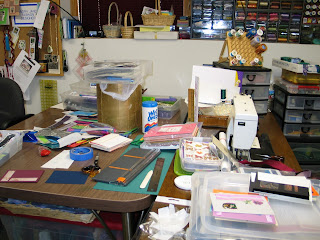 We didn't even make that much of a mess.

She gave me this beautiful necklace that she had made. For the Bead Journal Project, she is making Mother/Daughter necklaces-similar but with a difference. Click on the Karen label at the right to go to her blog. My husband took 4 pictures of us wearing them, but they look so bad that we have decided neither of us would post them!
Posted by Sandy at 7:51 AM 2 comments:

Block of the Month 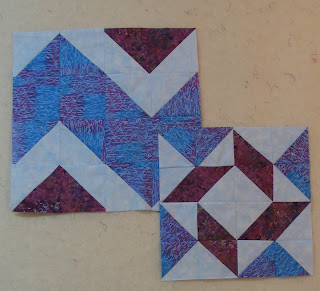 www.craftsy.com has a Block of the Month challenge with videos that keep showing me new things. This month I learned a new way to do half square triangle, although this method does leave bias edges to deal with.

You know I'm not a traditional quilter. Every month I've made is a different size! They will go into a charity quilt at some point.
Posted by Sandy at 5:00 AM 1 comment: 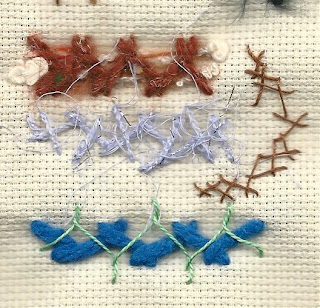 www.pintangle.com is the location of the challenge by Sharon to experiment with a stitch each week. Here is my wacky Herringbone Stitch with unusual threads. The bottom on has Cretan Stitch over it.

Here it is worked in a regular manner and can make a nice filling stitch. 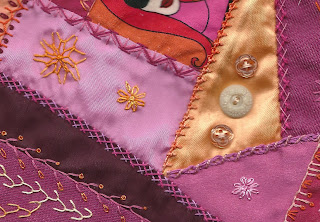 It's a favorite for crazy quilters and looks good doubled up with two types of threads. 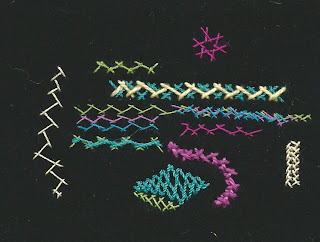 And done on wool to make the stitch really pop by using high contrast.
Posted by Sandy at 7:50 AM 4 comments: 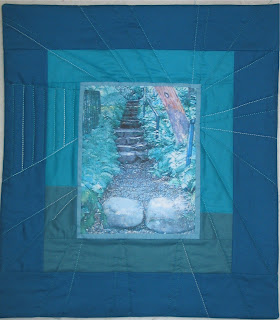 With two friends, I went on a photo hike. This was a hidden staircase and delighted me. I printed it on prepared cotton fabric.

Because the photo was detailed, I decided to keep the framing simple and echo the colors in the photo. The center is machine embroidered to highlight the design. The quilting echos the elements in the photo.
Posted by Sandy at 7:45 AM 3 comments:

Sandy
I consider myself a hand and machine knitter and embroiderer. Lately, I've been doing paper/mixed media things.